Nitrogen is commonly used in industry because it is dry and inert. While traditionally nitrogen has been obtained through liquid N2 deliveries and high pressure compressed gas cylinders, onsite nitrogen generation is a more modern approach that places you in control.

Just connect a compressed air line to the inlet of the nitrogen generator package, connect the outlet to your nitrogen line and the unit is ready for trouble free operation.

A continuous supply of consistent purity is then available minutes after start-up, and it can expand in line with your business needs – a complete future proof solution!

Get a nitrogen generation quote

Nitrogen generators are designed to operate to meet your demand, up to 24 hours/day, 7 days/week. Having a constant and reliable supply of nitrogen removes the inconvenience of running out of stored nitrogen or waiting for deliveries during adverse weather conditions. And by matching the demand, it reduces potential downtime of equipment.

Using a nitrogen blanket during beverage storage, pre and post bottling, prevents the growth of bacteria and other microbes. Another use is purging air from pipes and hoses prior to bottling and to ensure oxygen is not introduced during transport. It can also help to preserve taste and freshness.

Able to provide purity levels up to 99.999%, modular nitrogen generator units have continuous real time monitoring inbuilt, so you can see the purity produced at any time. 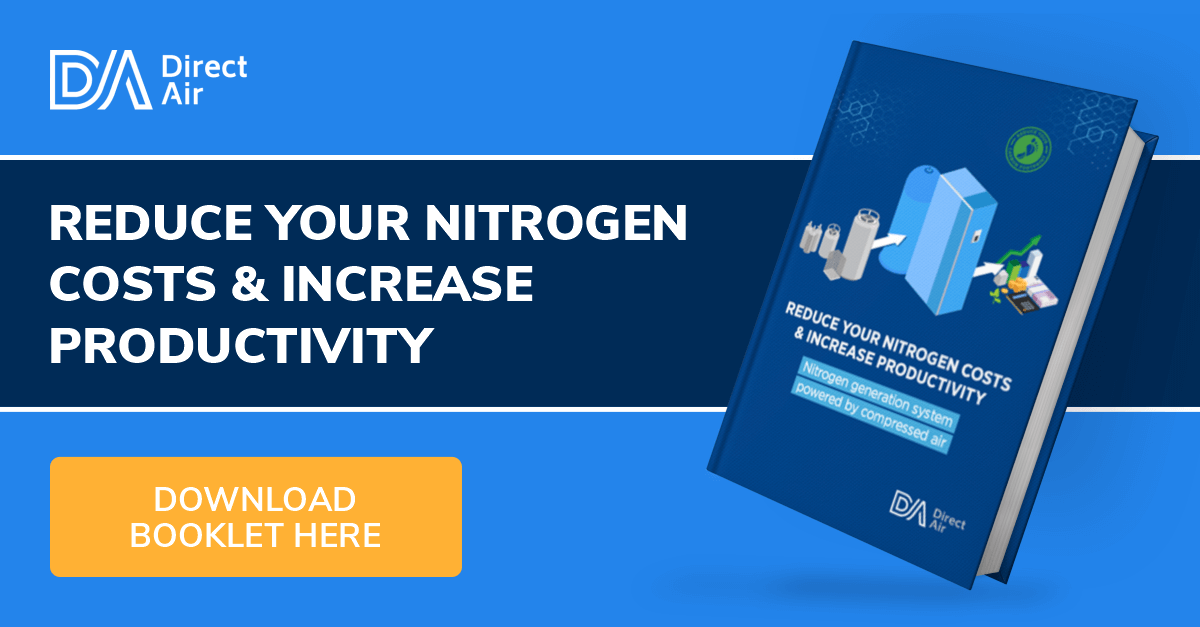 Talking to us is easy

Get in-touch with the Direct Air team today to talk over your requirements big or small!

Drop us a line

Direct Air are experienced in providing Nitrogen generation equipment for many industrial applications. Here are a few examples:

Using a nitrogen blanket during beverage storage, pre and post bottling, prevents the growth of bacteria and other microbes. Another use is purging air from pipes and hoses prior to bottling and to ensure oxygen is not introduced during transport. It can also help to preserve taste and freshness.

Blanketing with an inert gas, such as nitrogen, is often used to ensure the chemical integrity and maximise safety. Nitrogen tank blanketing controls the oxygen concentration and humidity within the vessel, protecting the product from contamination, degradation, and chemical change. The reduced oxygen level minimises the chance of explosion. A nitrogen blanket can also be used to balance tank volumes and prevent collapse during unloading.

The use of nitrogen is widespread in the metal processing industry, including much of the support equipment such as lasers. Using nitrogen to minimise the contact with oxygen improves final product quality and minimises rework.

Nitrogen is mainly used for automatic soldering machines and stops the oxidisation of solder.

When a nitrogen generator produces nitrogen gas, the generator does not create nitrogen by itself. Rather, nitrogen gas present in air (roughly 78% of air is nitrogen) is purified inside the generator, as any additional molecules, such as, oxygen, carbon dioxide or water, are removed from the gas.

Nitrogen compressor technology enables this separation process by providing air to a nitrogen generator system to purify either through a membrane and other filters or through a Pressure Swing Adsorption (PSA) system and filters.

For a PSA nitrogen generator, two CMS columns are required, where one column is depressurised whilst the other column sends the air through the sieve at pressure. PSA nitrogen generators also include a multistage prefiltration processes to remove dust particles and moisture from air before it reaches the CMS.

Another nitrogen compressor-based system is membrane nitrogen generator, where air is compressed and passed through a membrane consisting of hollow fibres with pores small enough to prevent nitrogen from being pushed through along with oxygen. High purity nitrogen gas is then left behin

Complete the form below to contact the Direct Air team with your enquiry.

Talking to us is easy

We're happy to explain how all our products work and to help you get started over the phone. Real people, plain English and no obligation.

We consider your entire compressed air system from the compressor to downstream equipment & pipework.

Whatever the industry and whatever the application, there's a growing demand for higher-quality compressed air.

Drop us a line